Home
Personal
Spirometers
How To Calculate Breathing Rate From A Spirometer Trace?

Most over the counter spirometers don’t have this feature, but if you get a spirometry test at hospital, it may include a spirometer trace. This is a graph showing volume of inhaled and exhaled air over time.

Older analogue spirometers consist of a basic setup with a sealed chamber and a kymograph. As you breathe in and out of the chamber, the kymograph records a trace of your breathing pattern on paper.

Modern digital spirometers record the waveform on a display.

Doctors use a spirometer trace to calculate various aspects of your breathing. These include tidal volume, inspiratory/expiratory reserve volume, residual volume and breathing rate.

What Does a Spirometer Do?

A spirometer is a device that measures the volume of air you breath in and out. It is an important tool for monitoring lung health and managing various respiratory health conditions like asthma.

When you get a spirometry test at a hospital or pulmonary lab, ask to see your spirometer trace. It’s an interesting graph that provides different kinds of measurements from the ones above.

The line graph on a spirometer trace represents how much air you are breathing in and out over time.

The first section with small wavy lines is called tidal volume. This is the volume of air you breathe in and out during normal respiration.

The line then shoots up. This is the inspiratory reserve volume, the amount of air you breathe in after a normal inhalation.

The line then shoots down below. This is the expiratory reserve volume, the amount of air you can force out of your lungs after a normal exhalation.

These two volumes plus the tidal volume make up the vital capacity of your lungs.

You’ll notice that the line never quite reaches zero. That’s because you cannot expel all the air from your lungs, otherwise they’d collapse. The remaining air makes up the residual capacity.

Breathing or respiratory rate is the number of normal breaths you take in a minute. Calculating your breathing rate from the trace is easy and quick. You’ll need to have breathed in and out of the spirometer normally for at least a minute.

Use the first section of the graph – the one that indicates tidal volume – to calculate breathing rate. Simply count the number of peaks or troughs (the tops or bottoms of the wave line) for 60 seconds along the time axis.

Start counting from the left of the graph where the line starts and stop where the line crosses the 60-second mark on the X-axis. Remember to only count just the peaks or just the troughs. This ensures you count full breaths.

The normal breathing rate for an adult at rest is 12 to 16 breaths a minute. That translates to 12-16 peaks or troughs. 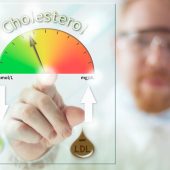 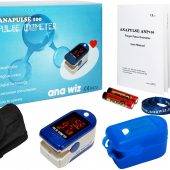