When using a thermal imaging camera, you’ll notice that warm objects and bodies such as animals and people are much easier to detect at night than during the day.

Why is that and does it mean that you can only use a thermal imaging camera at night?

The fact that thermal imaging cameras work better at night has nothing to do with the amount of light in the environment.

Thermal imaging cameras do not use light to ‘see’; rather, they detect heat (infrared radiation) from various surfaces. They then display temperature differences of the environment using different colours on a screen.

During the day when the sun is out, everything is warm because of the sun’s heat. So it becomes harder for the camera to detect temperature differences.

Thermal imaging still works during the day, but it’s not as easy to pinpoint hot and cold areas in certain environments (e.g. where there are rocks or on bare ground).

At night, objects become cooler and anything that generates heat like a person, an animal, or a live electrical wire stands out more.

Basically, the higher the temperature of the target object from its surroundings, the easier it’ll be to detect it using a thermal imaging camera.

How Does A Thermal Imaging Camera Work?

Everything one earth (and in the universe) radiates infrared energy. When the infrared energy or radiation is high enough, we perceive it as heat. For example, heat from a fire or the sun.

Thermal imaging cameras have a special sensor that collects infrared energy (with the help of a focusing lens) from objects and uses it to accurately measure temperature without coming into contact with the object.

This is how infrared thermometers work. You point the thermometer at a surface and it instantly reads its temperature.

Hotter objects might show up on the display in yellow, orange and red colours while cooler surfaces appear blue and purple.

This makes it easy to quickly identify hot and cold areas in a certain environment. If you are hunting, a deer will be easy to spot in a bush and even through fog and rain.

If you are looking for a water leak in your home, it might show up as an unusually cold spot behind a wall.

Now you can see why thermal imaging cameras tend to work better at night. There’s a bigger temperature difference between objects and the cooler background. Anything slightly warm easily shows up on the display.

A thermal imaging camera can be used at any time of the day. Remember it’s not dependent on visible light.

That’s why it’s a common tool for ‘seeing’ in the dark for applications like hunting and security. Warm bodies can be spotted in total darkness.

But even during the day when everything’s warmer, thermal imaging cameras are sensitive enough to differentiate between different objects.

They are especially helpful for seeing through smoke, fog, thickets, dust or rain.

Thermal Imaging Camera vs. Night Vision: Which Is Better?

Night vision devices (binoculars, scopes, cameras etc.) are cheaper compared to thermal imaging devices. But they are also limited in capability and versatility.

Night vision works like a normal camera or your eyes. It relies on visible light to see the environment.

Night vision is used in very low light environments where human eyes cannot see. Night vision takes the little light available (can be starlight or artificial light) and magnifies it many times over to make an object visible on a display.

Unlike thermal imaging cameras that have 24/7 utility, night vision is useful only at night. Using night vision goggles during the day is pointless and can even damage the device.

And even at night, thermal imaging cameras are more capable. They can work in total darkness, they can detect objects further away, and they provide better contrast, making it easy to identify a target.

Night vision cannot work in total darkness, it has limited range, and everything shows up in low contrast green images.

Do Thermal Imaging Cameras See Through Everything?

The most common myth is that thermal imaging cameras can see through anything. That’s not true.

A good example is walls. You may have seen law enforcement in movies using infrared imaging to see through walls into a room or house. That only works in movies.

In real life, walls are thick enough to block infrared radiation. You cannot see a person in another room through a wall using a thermal imaging camera.

That said, if something in the wall is colder or hotter than the wall, you might be able to see it with a thermal imaging camera. For example, a water pipe or a live wire.

Thermal imaging cameras also don’t see through glass. Glass reflects infrared radiation, keeping it from going through. So while you can see someone through a car window, a thermal camera will not pick them up. 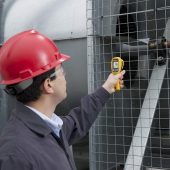